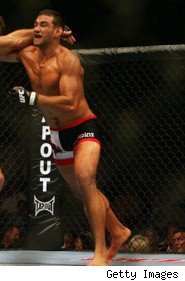 The UFC heavyweight division is a little jumbled right now, but there's a clear path to the title: Randy Couture will fight Brock Lesnar in November, Antonio Rodrigo Nogueira will fight Frank Mir in December, the winners will fight each other in the spring of 2009, and the winner of that four-man tournament is the undisputed champion.

Except that there's one guy who thinks he's getting a raw deal in all this: Fabricio Werdum, who is coming off back-to-back impressive wins over Gabriel Gonzaga and Brandon Vera, and who tells Tatame.com that his contract calls for him to get a title shot if he beats Junior "Cigano" dos Santos at UFC 90.

Werdum says, correctly, that Lesnar has leapfrogged him in the title picture because "Lesnar is more famous in United States."

He adds, "I don't know how they'll do it, because my new contract guarantees a title shot with a victory against Cigano."

That's a surprising claim -- the UFC doesn't usually guarantee title shots in its contracts. If Werdum is actually going to fight for the title after UFC 90, he's going to have to wait a while -- It could easily be the autumn of 2009 before the winner of the four-man heavyweight title is ready to defend his belt.

I think Werdum, assuming he beats Cigano, should fight one more time next year -- maybe against Cheick Kongo -- and then, if he wins, get the first crack at the winner of the heavyweight tournament. If Werdum thinks that's not fair to him, that's understandable, but that's life.