Karo Parisyan Hurt, Will Not Fight at UFC 88 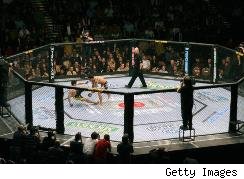 The UFC announced today that Karo Parisyan is injured and will not fight Yoshiyuki Yoshida at UFC 88 Saturday night in Atlanta. It's too late to find a replacement to fight Yoshida, so that fight has been scrapped.

There is no word on what happened to Parisyan, other than the UFC referring to it as a "last-minute back injury." Parisyan-Yoshida was scheduled for the televised portion of the card.

A match-up with Yoshida would have been a good one, and if Parisyan's injury isn't too serious, it would make sense for the two to fight again at a later event, perhaps UFC 89 on October 18.