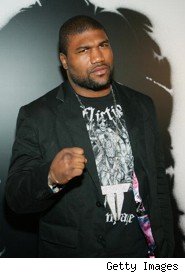 Two of the UFC's most popular fighters, Quinton "Rampage" Jackson and Wanderlei Silva, are close to signing on for a fight at UFC 91, MMA Rated is reporting.

If the Jackson-Silva fight happens, it would make UFC 91, quite simply, the biggest card in the history of mixed martial arts. The main event at UFC 91, Brock Lesnar vs. Randy Couture, might be the most anticipated mixed martial arts fight of the year, and Jackson vs. Silva is a main event-quality fight.

Other fights slated for UFC 91 include Kenny Florian vs. Joe Stevenson (which is probably the best lightweight fight the UFC can put together as long as B.J. Penn is planning to move up to welterweight), Gabriel Gonzaga vs. Josh Hendricks, Amir Sadollah vs. Nick Catone and Jeremy Stephens vs. Rafael dos Anjos.

I was skeptical when UFC President Dana White said the Lesnar-Couture fight would generate the most pay-per-view buys in MMA history. But if Rampage-Wanderlei is added to the card, I think UFC 91 will break the record set by UFC 66 and become the biggest card the sport has ever seen.