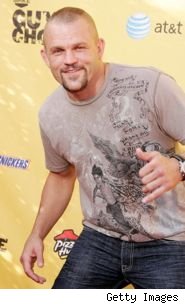 Chuck Liddell has his first fight of 2008 Saturday night when he takes on Rashad Evans at UFC 88. But it might not be his only fight of 2008.

UFC President Dana White said on today's installment of MMA Live that Liddell could be back in the Octagon in less than four months, and he could be fighting Forrest Griffin for the light heavyweight championship.

"Depending on what happens to Chuck Liddell this weekend, Chuck could be fighting Forrest for the title in December," White said.

The UFC's big December show is UFC 92 on Saturday, December 27, and the interim heavyweight title fight between Antonio Rodrigo Nogueira and Frank Mir is supposed to be the main event in that show. If Nogueira-Mir becomes a co-main event with Griffin-Liddell, UFC 92 might become an even more lucrative show than UFC 91.

But first, Liddell has to take care of Evans on Saturday night.