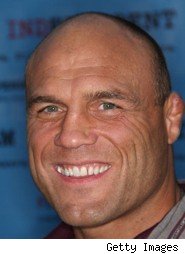 On today's conference call to announce the upcoming Randy Couture vs. Brock Lesnar fight, I asked Couture how much he weighs right now, how much he'll weigh when he steps into the Octagon against Lesnar, and how concerned he is about fighting a significantly larger opponent.

"Yesterday after practice I weighed 224.5 and I would suspect that walking into the fight I'll weigh right around that," Couture said. "Early in my career [size] was a concern -- I don't think I was technically prepared to deal with the size difference. But I think I've developed. ... I think you just have to be a little wiser."

There's no doubt that Couture is a wiser fighter than Lesnar, but there's also no doubt that he's a smaller fighter. Lesnar has to cut weight to get down to the heavyweight maximum of 265 pounds, and he'll probably step into the Octagon against Couture weighing somewhere in the 275 range, for a 50-pound size advantage. That's significant.

And yet I think Couture, with his superior technique and experience, will come in with the right game plan and defeat Lesnar.