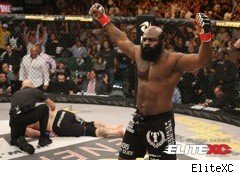 Here's a fundamental problem that the sport of mixed martial arts faces: There are a lot of people out there who would rather see Kimbo Slice fight Ken Shamrock than see Andrei Arlovski fight Josh Barnett.

I've been doing a bit of informal research on the subject, and it's clear to me that there are a whole lot of casual observers -- not the types of people who read MMA blogs -- who think Kimbo vs. Shamrock is exciting, and have no idea who Arlovski and Barnett are.

Obviously, hard-core MMA fans know that Kimbo vs. Shamrock (the EliteXC October 4 main event) is nowhere near as good a fight as Arlovski vs. Barnett (the Afflcition October 11 main event). But right now, that message hasn't gotten through to everyone. With EliteXC on network television and Affliction on pay-per-view, it's not really an apples-to-apples comparison, but in the eyes of the average man on the street, Kimbo-Shamrock is the bigger fight.

And that's bad for the sport. In football or basketball or baseball, the average fans and the hard-core fans both know, basically, which the best games are. If MMA ever reaches the point where the best games are also the most lucrative matchup, that will be a big step in the sport's development. But it's not there yet.