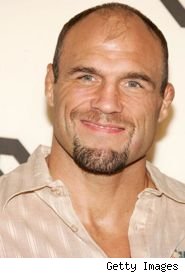 The best news that mixed martial arts fans could hear may soon be upon us. There are growing signs that Randy Couture will re-join the UFC for a multi-fight deal, and that his first fight would be against Brock Lesnar. There is even a chance that the second would be the long-awaited superfight against Fedor Emelianenko.

All indications are that Couture is making progress in talks about resolving his contract impasse with UFC, and that the first fight in a new three-fight deal would cone November 15 against Lesnar at UFC 91. We noted the possibility after an MMA Junkie report, and and BloodyElbow.com has confirmed the talks.

By all accounts, Couture is training as if he has a fight coming up within the next two or three months. If the Lesnar-Couture fight happens, it would probably be the UFC's most lucrative pay-per-view of the year.

But the news gets even better. Ariel Helwani of MMA Rated reports that the UFC is considering a proposal from M-1 Global to co-promote a Randy Couture vs. Fedor Emelianenko fight next year. That's the fight every MMA fan wants to see, and it would probably be the most lucrative in the history of the sport, but I'm still skeptical that UFC would do it because M-1 and Fedor have always insisted on terms that the UFC would never go for. Dave Meltzer reports that all previous hangups involving Emelianenko and UFC remain, so that fight is a long shot. Still, MMA fans can hope.

Whatever might happen with Couture and Fedor down the line, UFC is getting close to the point where they're going to need to announce a main event for UFC 91. This would have seemed impossible a few days ago, but there really does seem to be a good chance that the main event will be Couture vs. Lesnar.