UFC 91: If Cheick Kongo's Shoulder Means He Can't Fight Brock Lesnar, Who Will? 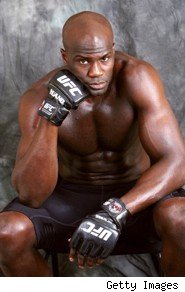 Brock Lesnar has only had three mixed martial arts fights in his career, but thanks to his undeniable athletic talents and his fame as a pro wrestler, everyone in the MMA world is wondering what he'll do next.

Contrary to popular belief, it apparently won't be a fight against Cheick Kongo at UFC 91. I've heard from a couple of sources that Kongo's shoulder is going to make it hard for him to fight in the next few months, and on today's MMA Live, ESPN's Ryan Hockensmith said Kongo is going to have surgery and "You can cross Cheick Kongo off for Brock Lesnar."

So if Lesnar won't fight Kongo at UFC 91, who will he fight? There aren't a lot of great options in the UFC heavyweight division because the division is thin and most of the top guys already have fights scheduled. Gabriel Gonzaga is an option, but I think UFC would worry that Lesnar isn't ready for it, and that a loss to Gonzaga
would damage Lesnar's image. Cain Velasquez and Shane Carwin are possibilities, although I think UFC would like to bring both of those guys along more slowly.

I respect the fact that UFC has thrown Lesnar in with two legitimate fighters -- Frank Mir and Heath Herring -- and not tomato cans like EliteXC is giving Kimbo Slice. But I think UFC might have a trouble finding the right opponents for Lesnar going forward, simply because there aren't all that many good heavyweights available.