Can Ken Shamrock Pass His Physical to Fight Kimbo Slice? Commission Will Look at 5 KOs 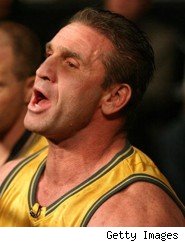 EliteXC announced this week that Ken Shamrock will fight Kimbo Slice in its October 4 show on CBS, a show that could be make or break for the future of EliteXC.

But before the fight can go down at the BankAtlantic Center in Sunrise, Florida, it must be approved by the Florida State Boxing Commission. And Alexis Antonacci, press secretary for the Department of Business and Professional Regulations, which oversees the Boxing Commission, told me today that such approval is not a foregone conclusion.

Specifically, I asked Antonacci about the fact that the 44-year-old Shamrock has lost each of his last five fights by first-round knockout or technical knockout, and whether that could play a role in the Commission determining that it isn't safe to put Shamrock in the cage again.

"That is certainly something that we look at," Antonacci said of Shamrock's five straight knockouts. "The safety of the fighters is one of our foremost concerns."

Although Antonacci said she had no specific knowledge that Shamrock wouldn't be approved, she also stressed that the state exercises caution about approving bouts.

"In terms of his record and the number of times he's been knocked out, we would look at that prior to the physical examination," Antonacci said. "When the matchmaker puts people together for the fight, they have to be approved by us."

Shamrock vs. Kimbo has so far passed through Florida's initial approval process, but Antonacci stressed that "we haven't done a full check on each of the fighters."

Most of the time, professional MMA fighters have no trouble getting approved when the state does that full check. Then again, most of the time, professional MMA fighters aren't 44-year-olds who have gone more than four years since they were even competitive in a fight. And even if Florida says the five straight losses aren't enough to hold up the fight, Shamrock would also have to pass a physical exam 14 days prior to his fight before it would be ready to go.

My guess is that Shamrock will, in fact, pass the screening and his physical and be approved to fight Kimbo. But it's not a sure thing.