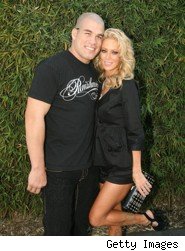 Longtime Ultimate Fighting Championship star Tito Ortiz left the organization in May and said he would sign on with another mixed martial arts organization soon. But various rumors of Ortiz signing with various other promotions have come and gone, and Ortiz still isn't under contract to sign with anyone.

Ortiz certainly doesn't need to fight for financial reasons. He made plenty of money in his UFC career, and Jameson, who founded the adult entertainment empire ClubJenna, earns the real bread in the family. And Ortiz isn't the same fighter he once was: He hasn't won a fight in almost two years, and he might be wondering if he wants to keep putting his body on the line.

Jameson told Us Magazine that she and Ortiz are "so happy" and "still in a state of shock." Fatherhood tends to change people's perspectives on life, and with Ortiz becoming a father and dragging his feet on getting back into the fight game, you have to wonder if he's going to quit the sport for good.