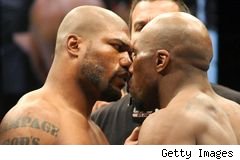 A day after news broke that Quinton "Rampage" Jackson is facing two felony counts in connection with a hit-and-run crash, the UFC has indicated that those charges won't derail his fighting career.

UFC President Dana White tells Kevin Iole that Rampage is likely to fight at UFC 91 on November 15 in Portland and that the UFC completely supports its star in his legal case.

"Of course he'll fight. If he was doing drugs, if he had been drunk, if he had gone out there and done what he did because he was pissed off at someone, that would be a completely different story. But he was ill. And in this company, we support our friends and anyone who works for us when they're ill and have problems. He was ill, the incident occurred, and now he's fine."

UFC 91 is also likely to include Kenny Florian taking on Joe Stevenson and Brock Lesnar fighting Cheick Kongo. I had previously suggested that Wanderlei Silva might be on the card, but now reports suggest that a Jackson-Silva fight is not expected to happen this year, so Silva will apparently not be Rampage's opponent.

Although some will suggest that Rampage shouldn't fight while he faces felony charges, I really don't agree with that. This is a complex case in which Rampage apparently had some type of brief mental illness, and based on what we know now, I think he should be able to continue to ply his trade while he fights the charges against him.