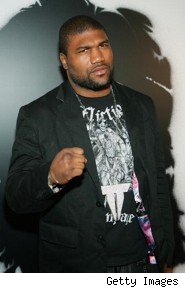 Ultimate Fighting Championship star Quinton "Rampage" Jackson has been charged with two felonies in connection with a July incident in which he hit cars and led police on a chase, TMZ is reporting.

He was not, however, charged with causing the miscarriage of a woman whose car he hit; authorities reportedly believe her miscarriage was unrelated to the crash.

UFC has stood by Rampage, saying that exhaustion and a poor diet led him to become temporarily delirious, but that he is now healthy and not a danger to himself or others. Rampage is expected to step back into the Octagon late this year or early next year.