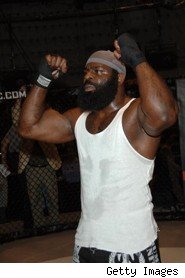 Kevin "Kimbo Slice" Ferguson, the YouTube sensation who turned his backyard brawling into a career in mixed martial arts, appears to have an opponent for the next time he steps into the cage: Ken Shamrock, the MMA legend who competed in UFC 1 but hasn't won a fight in more than four years.

Sherdog is reporting that Shamrock vs. Kimbo will be the main event for EliteXC's October 4 show on CBS.

From EliteXC's perspective, Shamrock is the perfect opponent for Kimbo because he's a recognizable name within the sport of MMA, but Kimbo has a legitimate chance of beating him. Shamrock at his best would have destroyed Kimbo, but at age 44 he's long past his prime. Shamrock has lost five straight fights, all by first-round knockout.

Kimbo vs. Shamrock isn't a marquee mixed martial arts fight, but it is a fight that will get a reasonable amount of attention and perhaps get good enough ratings to keep EliteXC afloat through the year. For that reason, Shamrock is the right choice.