Dana White on Anderson Silva: 'He Could Fight Georges St-Pierre at a Catch Weight' 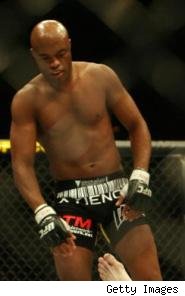 UFC had a press conference in downtown Chicago on Monday to promote the upcoming UFC 90 event, and outside the press conference about 100 fans congregated and craned their necks to catch a glimpse of the fighters.

There was one moment when those fans made an audible "ooh" sound at something said in the press conference, and that moment was when UFC President Dana White said of middleweight champion Anderson Silva, "He could meet Georges St. Pierre at a catch weight."

Silva and St. Pierre are, in my opinion, the UFC's two best pound-for-pound fighters, so it's not surprising that the fans would love the idea of seeing them in the Octagon together. I've said I'd like to see them fight at 180 pounds.
But I no longer feel that way, both because I don't think St. Pierre has what it takes to beat Silva, who is the best fighter alive, and because I don't think it would be safe for the already lean and lanky Silva to fight below the middleweight limit of 185 pounds.

Silva said through his translator that he walks around at more than 205 and liked fighting at 205 last month, but right now all his focus is on fighting Patrick Cote at 185 pounds. For his part, White said of Silva, "This guy wants to challenge himself. ... He'd probably fight at 145 pounds if we asked him to."