Dana White Tells Playboy About His Atheism, Steroid Use and Love for Donald Trump 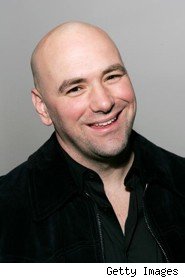 UFC President Dana White is the interview subject in the September issue of Playboy, and in his typically profane manner, White hits on some hot topics both in and, especially, out of the Octagon.

On religion, White reveals that he's an atheist: "I don't believe in God, the devil, ghosts or any of that s---," White says. "But I'm still fascinated by religion -- how violent and crazy it is. That stuff sticks with you."

Making an admission that few people associated with professional sports want to make these days, White provided a straightforward answer when asked if he has taken steroids. White says, "Yes. There was a doctor here in Vegas when I was in high school; you went to his office and said you wanted to try his 'weight gain' program. ... Injections and pills. Pretty soon I felt strong. Superhuman. But I wasn't comfortable with it."

Although Donald Trump is now involved in the rival mixed martial arts organization Affliction, White said he has nothing but positive thoughts about Trump.

"When the Fertittas bought the UFC, most venues wouldn't deal with us," White says. "We were outlaws. Our first event was at the Trump Taj Mahal, and Trump actually came to the fights. Way back in 2001 he was up in the front row, watching the UFC. You'll never hear me say a bad word about Donald Trump."

But that courtesy doesn't extend to other MMA promoters, including Gary Shaw, the former head of EliteXC, about whom White says, "Scumbag Gary Shaw is a piece-of-s--- dirtbag who could care less about our sport."

White repeated his frequent claim that UFC will soon be bigger than the NFL in the United States and bigger than the World Cup around the world, and he had some interesting thoughts about the world's most famous athlete: "I f---ing hate golf. It's a stupid game and a waste of time and good land. But I love Tiger's passion and killer instinct."

White also wants gay fans watching. He said, "Glad to have 'em! When we started out, I did a cool layout in a gay magazine with Liddell, Matt Hughes and some of our other fighters. There's no homophobia here."

The whole interview is worth a read.