GSP's Domination By the Numbers 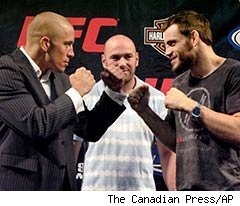 In most cases, a title fight has a significant impact on where fighters are ranked in their particular weight class. Usually, when the challenger loses, he moves down a few spots in the rankings and has to work his way back up again. In some cases, a fight can be extremely close or inconclusive, mandating an immediate rematch. The fight between Georges St. Pierre and Jon Fitch is the rare case where the outcome was conclusive, no immediate rematch is warranted, and yet St. Pierre and Fitch should remain #1 and #2 in the welterweight division.

If there was something higher than #1, that's where St. Pierre would be. He took the fight to Fitch in every conceivable way -- on the feet, in the clinch, and on the ground -- and won convincingly in each. It's not as if there was any doubt before, but he must obviously remain #1. 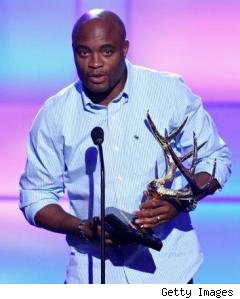 For Fitch, it's hard to point to a single thing he could have done better. He performed to the best of his abilities and was beaten by the superior competitor. His incredibly gutsy performance and refusal to quit or be finished is enough to solidify his standing, but he also did about as well as anyone else has against St. Pierre. He landed some shots, did some damage, and got St. Pierre to his back. That's more than most of GSP's opponents can say. Ultimately, Fitch runs into the same problem Rich Franklin has at middleweight: He's the second-best guy in the division, but the fighter ahead of him, Anderson Silva, is ahead by miles.

Here are some of the important numbers from the excellent match from Saturday night:

3: The number of times St. Pierre knocked Fitch down

This number is a testament to both fighters. For St. Pierre, he proved that he will stand-up, even after his loss to Matt Serra, that his stand-up must be taken seriously. Fitch was a game opponent with a solid chin and adequate form. St. Pierre didn't get these knockdowns because Fitch kept his hands down and left his chin out, he got them because he effectively counter-struck when Fitch over-committed to his strikes.

As for Fitch, if you needed any tangible evidence that he is one tough guy, it is extremely rare to see a guy get knocked down twice in one round and survive. The third round saw Fitch go down twice; once at the very start on a counter right hand and later on a head-kick/knee combination. The only instance of a fighter surviving two knockdowns in a round in recent memory was Sammy Morgan, who did it while getting man-handled by Forrest Petz. It takes "hard to put away" to another level.

5 and 0: The number of takedowns landed by St. Pierre and Fitch

St. Pierre did exactly what he's done in the past: Dominated the wrestling component against a fighter with a stronger wrestling pedigree. And just like he did against Josh Koscheck, St. Pierre established his dominance in this area within the first 10 seconds of the match. St. Pierre makes a statement with the very first takedown that he will be the one who controls where the action takes place. He landed five of seven attempts, for a success rate of 71%.

Fitch, meanwhile, could never really get started with his wrestling. Kept on the defensive by St. Pierre's striking, his takedown attempts seemed more borne of desperation than anything else. He latched on a pretty deep single leg in the fourth round, but St. Pierre showed excellent takedown defense and would not go down. To cap off this part of the fight, St. Pierre immediately took Fitch down once Fitch's final takedown attempt had failed.

49 to 5: The advantage for St. Pierre in power strikes on the ground

The question going into this fight was: Would Fitch's excellent defensive guard be enough to withstand GSP's furious ground-and-pound. For the first minute or so after St. Pierre's initial takedown, it looked like the answer 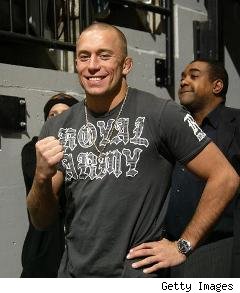 might be yes. Fitch did a good job of controlling St. Pierre's arms, keeping him in guard, and avoiding any major punishment. But that didn't last long. St. Pierre opened up with huge punches from the guard and followed them up with strong elbows. St. Pierre eventually did pass guard, moving to side control and then to mount. In the first round, St. Pierre landed 32 power strikes on the ground without absorbing a single one from Fitch.

Fitch's best shot came in the third round when he managed to get St. Pierre on his back. The problem was, by that point, Fitch had already absorbed dozens of strikes and been knocked down twice. He was able to hold St. Pierre down for little more than a minute before being reversed.

814-209: The effectiveness scores for St. Pierre and Fitch, respectively

St. Pierre's score is positively outrageous. FightMetric measures fighter effectiveness using an algorithm that synthesizes the events of a fight to produce an effectiveness score. In general, a fighter averages about 12 points per minute of fighting. So for a 25-minute fight, you'd expect an average score of 300. In reality, that number is lower, because fighters tend to tire and fights have less action in rounds four and five. But however you look at it, St. Pierre's offensive output was nearly triple that of an average fighter. He connected on 109 strikes, landed five takedowns, passed guard three times, executed a reversal, and locked on one serious submission attempt. That kind of all-around performance is one that we've gotten used to seeing from St. Pierre, but one that you're unlikely to see from many other fighters.