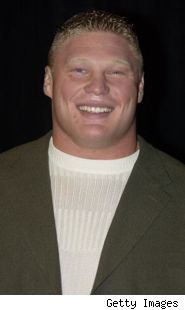 Wrestling star Brock Lesnar took a big step toward becoming a star in mixed martial arts tonight in Minneapolis by dominating Heath Herring in a bloody fight at UFC 87.

A brutal punch from Lesnar battered Herring's eye in the first round, and throughout the rest of the fight Lesnar, who won the NCAA heavyweight wrestling title in 2000, used his wrestling skills to dominate. The fight went the distance because Lesnar couldn't find a finishing move, but Lesnar's unanimous decision was clearly deserved.

Lesnar, who weighed in at the 265-pound heavyweight limit, overpowered Herring throughout. Herring is a skilled, experienced MMA fighter, but it was never even close. Lesnar destroyed him.

Lesnar was fighting for the first time since losing to Frank Mir by first-round submission in his UFC debut in February. He has clearly improved since then, and he's clearly a real player in the sport of MMA.