The Case for Jon Fitch 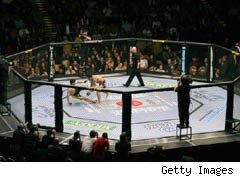 It's a championship fight featuring a dominant champion and a contender with question marks about his game. The champion is a finisher; the challenger tends to grind out decisions. It seems that everything the challenger does, the champion does just a little better. But still, the challenger is known for his heart and mental toughness; the champion still has doubters about how he performs when hurt or under pressure.

All of those statements could be used to describe the matchup this Saturday night between welterweight champion Georges St. Pierre and challenger Jon Fitch. But the descriptions above are also a spot-on summary of popular sentiment leading into the fight between Forrest Griffin and Quinton "Rampage" Jackson.

We all know how that one turned out.

The point is, don't count Fitch out. If Griffin vs. Jackson and the Randy Couture vs. Tim Sylvia fight have taught us anything lately, it's that you should never underestimate a scrappy, grinding fighter with a ton of heart in a five round match.

So how can Fitch do it? How can he pull of the second consecutive major upset in a UFC title fight? Using complete FightMetric statistics from the careers of both Fitch and St. Pierre, here are a few routes Fitch might want to consider:

Or is that Josh Thompson Method? Whatever you want to call it, the strategy 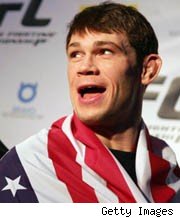 works: Stay on the outside, pepper your opponent with kicks to the legs and body, avoid takedowns at all costs, and capitalize whenever the tired, hobbled, frustrated champion makes a mistake. If you do it long enough, you can win a hard-fought decision.

There are a couple of things going for Fitch if he wanted to choose this route. First, he has demonstrated a talent for landing leg kicks. In his eight fights in the UFC, Fitch has landed 26 of 38 leg kicks, for an accuracy rate of 68%. And it's a tactic he's employed well recently. In his last fight, a unanimous decision over Chris Wilson at UFC 82, Fitch threw more leg kicks than in the previous seven fights combined. St. Pierre has never had to contend with someone trying to take out his legs. In all 18 of his career fights, opponents have only landed 19 leg kicks. Only BJ Penn and Sean Sherk were able to land more than five in a single fight. If Fitch can land kicks like the ones he threw against Wilson, it might put St. Pierre in a new and uncomfortable situation.

Of course, the ability to throw leg kicks is predicated on Fitch's ability to stay on his feet. Fitch is an accomplished wrestler who has demonstrated good takedown defense. Opponents have only landed 7 of 23 takedowns against him, or 30%. That means he has successfully defended 70% of takedown attempts, compared to the average fighter's 55% takedown defense rate. But defending takedowns is no easy feat against St. Pierre. GSP has landed 80% of his career takedown attempts, including many against wrestlers more accomplished than Fitch.

To date, only two fighters have been able to keep St. Pierre on his back for an appreciable amount of time. The first was Matt Hughes, but that was almost four years ago and St. Pierre has markedly improved since then. The second was Josh Koscheck, Fitch's friend and training partner, and that was just last year.

It took Koscheck a couple of tries, but once he got St. Pierre to the ground, he was able to keep him there. Even though Koscheck wasn't able to do much of anything (in fact, St. Pierre outstruck him off his back), it was enough for two of the three judges to give Koscheck the round.

So the strategy for Fitch becomes clear: Get St. Pierre on his back and hold him there long enough to convince the judges that you won the round. Given how much weight MMA judges seem to place on maintaining top position, it 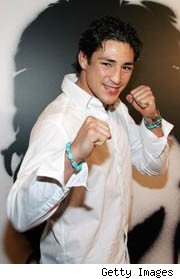 doesn't take much else besides top position to win a round. Do that three out of five times and you win a decision. It's not an exciting strategy, but a lay-and-pray win counts just the same as a knockout.

But how likely is it for Fitch to pull this off? He has demonstrated excellent positioning and uses a smothering style that can be low on action but high on control. In his fight against Diego Sanchez, Fitch kept on top or in back control for nine minutes and 40 seconds, the equivalent of almost two whole rounds.

The success of this strategy depends on Fitch's ability to get St. Pierre on his back in the first place. Fitch's takedowns are good (he succeeds on 61% of attempts), but maybe not good enough. St. Pierre has some of the best takedown defense in the game, avoiding 83% of attempts against him.

Fitch's other option is to try and sweep St. Pierre. A Brazilian Jiu-Jitsu black belt, Fitch has never executed a sweep in the UFC, but that's mostly for lack of opportunity. St. Pierre has been swept just one time in 18 fights, so it is possible. Just be careful; immediately after being swept by Jason "Mayhem" Miller, St. Pierre swept him right back.

Fitch is not thought to be much of a stand-up fighter and he's not known for striking with a lot of power. But neither was Matt Serra before he knocked out St. Pierre in one of the biggest upsets in MMA history.

Standing in the pocket and trading punches with St. Pierre doesn't sound like a very smart strategy, but if the alternative is spending time on your back, the "puncher's chance" all of a sudden looks a lot more attractive.

In his eight UFC fights, Fitch is 17 of 63 on power strikes to the head at a distance -- the strikes most likely to result in a knockout. That 27% accuracy rate is pretty pedestrian, but consider that two of those 17 strikes resulted in knockdowns. The knockout against Serra remains the one and only time St. Pierre has ever been knocked down. But as Serra proved, it only takes one to matter.