Gina Carano, Cris Cyborg to Fight (Not Each Other) at Next CBS EliteXC Show 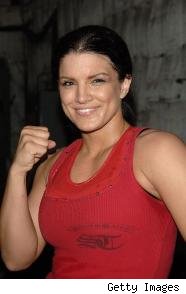 It appears that the two best known women's mixed martial arts fighters in America, Gina Carano and Cristiane "Cris Cyborg" Santos, will both fight on the October 4 EliteXC CBS show, but they won't fight each other.

We previously noted that Carano is likely to fight Kelly Kobold, and now Tatame and Bloody Elbow report that Cyborg will fight Japan's Yoko Takahashi. EliteXC is pairing Carano and Cyborg against women they both should beat, getting them both some more name recognition before they fight each other, most likely on EliteXC's first pay-per-view show some time next year.

It's an interesting move for EliteXC and CBS to put two women's fights on its October 4 CBS show, which is headlined by Kimbo Slice against an as yet unnamed opponent. It shows confidence in women's MMA, and I like it. I just wish I didn't have to wait for Carano vs. Cyborg.