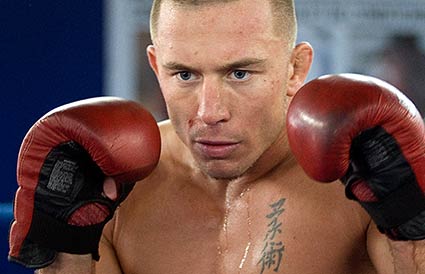 UFC 87 is probably the most complete card of fights the UFC has offered so far this year, with a terriffic welterweight title fight between Georges St. Pierre and Jon Fitch in the main event, and two high-profile undercard bouts in Kenny Florian vs. Roger Huerta and Brock Lesnar vs. Heath Herring.

What: UFC 87: Seek and Destroy

Who: In addition to the three fights listed above, the televised fights on the card are Manny Gamburyan vs. Rob Emerson and Jason MacDonald vs. Demian Maia.

Predictions after the jump.
Georges St. Pierre vs. Jon Fitch
Fitch has won eight straight fights, and if he wins on Saturday night, he'll have set a new UFC record for consecutive victories. He'll also be the new UFC welterweight champ, and he'd vault into the Top 10 of a lot of pound-for-pound lists. (He's No. 21 on my MMA Top 25.) But while I like Fitch, I just don't see it happening. St. Pierre is such a well-rounded fighter that I don't see any welterweight beating him when he's at his best, and I expect him to be at his best Saturday night.
Predicted winner: St. Pierre

Kenny Florian vs. Roger Huerta
This is my pick to be the fight of the night. Florian has great jiu jitsu skills and is coming off an impressive TKO win at April's Ultimate Fight Night, while the 20-1-1 Huerta has great power for a lightweight. The winner becomes the UFC's top lightweight contender, although it's not clear whether champion B.J. Penn will stay at lightweight long enough to fight him.
Predicted winner: Huerta

Brock Lesnar vs. Heath Herring
Lesnar proved that he's a great athlete in his amateur wrestling career, and he proved that he's a great pay-per-view draw in his professional wrestling career. But can he make the transition to MMA? I think he can -- and I think he would have beaten Frank Mir in his February UFC debut had referee Steve Mazzagatti not stood him up to take a point away for an illegal knee. However, I also think Herring has just the right style to submit Lesnar, the same way Mir did. I credit UFC for making Lesnar fight real opponents instead of James Thompson-style tomato cans, but I think he's going to begin his UFC career 0-2.
Predicted winner: Herring

Manny Gamburyan vs. Rob Emerson
The 27-year-old Gamburyan has a judo background and is a strong submission artist, and I think he should tap the mediocre Emerson out in the first round.
Predicted winner: Gamburyan

Jason MacDonald vs. Demian Maia
The Canadian MacDonald has been around a long time and is well known to MMA fans, but I don't see him keeping up with the Brazilian Maia, a jiu jitsu master who is undefeated in his MMA career and has won submission of the night in both of his UFC fights.
Predicted winner: Maia