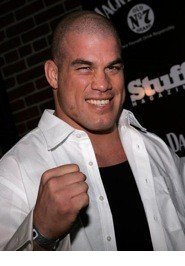 The Affliction mixed martial arts organization has signed its biggest star yet, adding former UFC light heavyweight champ Tito Ortiz. And Ortiz made clear to Arash Markazi that he did it for the money:

"I guarantee you that my contract will be like no other," said Ortiz, stopping short of giving away the specifics of a deal that could include responsibilities outside of the ring. "It will be a ground-breaking record contract for sure, without a doubt. There's so much money to be made right now in mixed martial arts and it's all about the fighters trying to make that money. It's going to be a long-term deal where I put my heart and soul into the company and help build them. That's something I'm interested in doing. They're going to bring me on, not just as a fighter but also doing some of the back work also."


At age 33, Ortiz isn't as good a fighter as he was a few years ago, but he's still enormously popular, and he's the only fighter in the Affliction stable who's a proven pay-per-view draw. After the news that Fedor Emelianenko is out of Affliction's October 11 show, Affliction needed to secure Ortiz, and now it has.