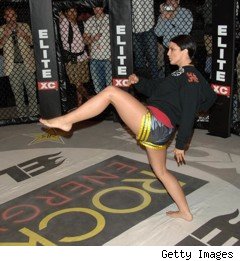 That fight is a fine match-up, but it's a bit of a disappointment, because so many MMA fans were hoping to see Carano fight Cris Cyborg, who put on a dominant performance in last month's CBS show.

But that gets to what I thought was the key takeaway from my interview with EliteXC boss Jeremy Lappen: EliteXC isn't on CBS for the sake of being on CBS. EliteXC is on CBS in an attempt to build a brand, and then capitalize on that brand by putting the most popular fighters on pay-per-view.

So although it was a breakthrough for mixed martial arts to get on network television, the bottom line is that this is a business that only really makes money on pay-per-view TV. At least, that's what EliteXC thinks.