Arlovski-Barnett? Without Fedor, Affliction Better Have Tito Ortiz Up Its Sleeve 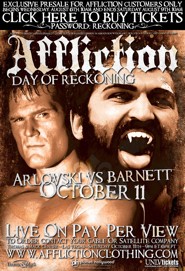 Fedor Emelianenko will not return to the ring as previously scheduled at the next Affliction show, as he reportedly suffered a hand injury in the process of beating down Tim Sylvia last month. So Affliction's official web site is now featuring the poster on the right, suggesting that Andrei Arlovski vs. Josh Barnett will be the main event for their October 11 show.

I like both Arlovski and Barnett, but I hope Affliction has something more in store than just that. If they think an Arlovski vs. Barnett main event is going to sell on pay-per-view, the folks at Affliction are going to be looking at the kinds of pay-per-view numbers that put companies out of business.

That's why it's so important that Affliction finally get Tito Ortiz signed, as they've long been reported to be close to doing. Ortiz isn't a great fighter anymore -- he isn't as good as Arlovski or Barnett -- but he is the biggest draw Affliction can get on the card in time for October.

Affliction's first show was a success in terms of the quality of the product on display, but I'd argue that it was a failure if Affliction's long-term goal is to build a profitable mixed martial arts company. I have a feeling that its second show will be a failure as well, but if Ortiz isn't on the card, that feeling will be a certainty.