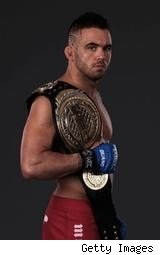 Jamie Varner and Carlos Condit held on to their World Extreme Cagefighting title belts, while Brian Stann lost his, in an action-packed night of fights at WEC 35 in Las Vegas.

Varner, the WEC lightweight champion, defeated Marcus Hicks with a dominating first-round knockout. In an incredible striking display, Varner used his height and reach advantage to repeatedly pummel Hicks with knees and punches. Hicks showed a great chin and tremendous courage, but he was knocked out just over two minutes into the fight.

Stann lost his light heavyweight title to Steve Cantwell, who unleashed a brutal display of strikes in the second round, dropping Stann to the canvas and knocking him out. Stann, whose All-American image as a recipient of the Silver Star for service in Iraq has been heavily marketed by WEC, entered the fight 6-0 with six first-round knockouts. But Cantwell had too much versatility for Stann, taking the title belt with a great all-around performance.


Condit, the WEC welterweight champion, had a tougher than expected test against challenger Hiromitsu Miura. Although Condit controlled most of the fight with his superior ground game, Miura's judo throws at times caught Condit off guard, and Miura showed good striking power. Ultimately, however, Condit did what he needed to do, unleashing the ground and pound in the fourth round before the ref stopped the fight.